What are terminal blocks?

A terminal block is a modular block with an insulated frame that is designed to secure multiple wires together. In this way, a terminal block can be used as a hub where maintenance can be performed more easily. They work by clamping down on a bare wire (European terminal block), or by securing a wire, or more commonly, a wire with a ring terminal on the end (standard terminal block). The bottom line is that when it comes to wiring, the easier you can make a job, and the more you can future proof it, the better. That is where terminal blocks come in. One question we see a lot is about the difference between terminal blocks and bus bars.

"The bottom line is that when it comes to wiring, the easier you can make a job, and the more you can future proof it, the better."

Where are terminal blocks implemented? 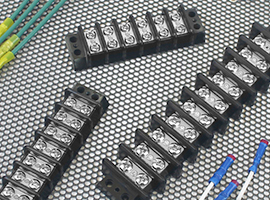 What is the difference between terminal blocks and bus bars?

The biggest difference between a terminal block and a bus bar is that a terminal block has separated circuits where each incoming wire is paired with an outgoing wire whereas a bus bar gathers multiple wires together for electrical distribution. The easiest way to tell them apart is by the tinned copper body. If the body is one solid piece of metal, then the electricity will be distributed evenly and as such, is a bus bar. If, on the other hand, the body is segmented into pieces of tinned copper separated by plastic ridges, then they are individual circuits, and as such, a terminal block.

What types of terminal blocks are available?

Standard terminal blocks are the ones that look a lot like bus bars but instead of one solid piece of metal, they have ridges of plastic between the circuits. These are the most common type of terminal blocks used in the USA. They work best with ring and fork terminals as those types of terminals are far more resistant to vibration than just using bare wire. Think about it, with a bare wire, the constant vibration of a marine environment may eventually cause the wire to pull free. With ring or fork terminals, they are securely attached to the body of the screw and as such, cannot pull out.

European terminal blocks are a solid choice as an electrical solution. Whereas the standard style has you connect to the top of the terminal block body, the European terminal block possesses an internal cavity where the wire is inserted. The screw on the top is then tightened causing it to press into the wire creating a solid connection. It is important to note that if you are using stranded wire, you may want to employ wire ferrules as they basically turn stranded wire into solid wire. They achieve this by jacketing the wire in a conductive sleeve.

Where would I use terminal blocks? 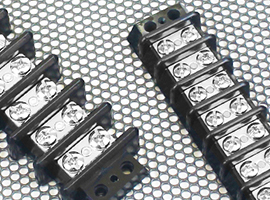 Terminal blocks are the ideal solution for consolidating wires while keeping circuits separate. Consolidating wires serves a great function in the way of making your maintenance and repair much simpler. Rather than following twenty wires and adjusting them at their ends, you can simply inspect each connection on your terminal block and branch out from there if needed. You will want to use terminal blocks in an area that is easily accessible and well-lit to make the process even easier.

Although terminal blocks offer a range of advantages, one of the most important is the fact that they allow you to distribute voltage and power to smaller circuits. They do this while combining grounds in your electrical system. Another great advantage of using terminal blocks is that they eliminate the need for splicing. Rather than having to prep your parts and get your tools to crimp a butt splice on, you can just connect the bare wires to the terminal block body. Beyond that, terminal blocks allow you to simplify your wiring. As we stated above, consolidating your wires into one location, makes any future adjustments that much easier.

What industries use terminal blocks?

Terminal blocks are found in a range of industries including the marine industry, database industries, solar industry, and multiple industrial applications. Their ability to consolidate separate circuits into one convenient location makes them ideal for applications where field service is going to be an issue. This fact coupled with the advantages we mentioned above makes them a common choice for professionals. Basically, they are found in any industry that deals with power distribution.

Pacer Group has over forty years experience in the marine industry. In that time, Pacer Group has cultivated a catalog of over 9,000 high quality parts. We do not just sell any product out there. Only the products that pass our rigorous testing can earn the privilege of becoming part of our product offering. If we will not put a part in our private boats, then we will not sell them to you. Some of the world's largest boat builders turn to Pacer Group for their electrical solutions. When you see Pacer on your products, you know that you have quality.