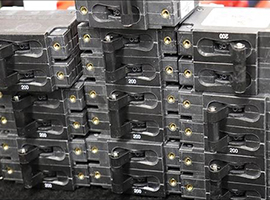 Breakers are switches that interrupt electrical flow after detecting a fault. That is to say that they protect important equipment in an electrical circuit from power spikes or short circuits that could cause irreparable harm. Rather than ruining expensive or sensitive equipment, breakers offer a method to protect those parts. They do this by breaking the circuit before the overload or short circuit can reach those sensitive pieces of equipment. Breakers are an important part of an electrical system in part because they protect the circuit and in part because they can be reset and reused. One question that we often receive is about the difference between a breaker and a fuse.

"Rather than ruining expensive or sensitive equipment, breakers offer a method to protect those parts."

What is the difference between a breaker and a fuse?

The main difference between a breaker and a fuse is that a breaker can be reset and used multiple times. A fuse, on the other hand, performs that same basic function as a breaker however, a fuse must be replaced each and every time. This is not to say that fuses are useless and should be replaced with breakers. Fuses are extremely useful and are the ideal choice in a multitude of applications. There are, however, applications where a fuse is just not pragmatic and even reasonable. In these applications, breakers are better suited for the job.

What types of breakers are available?

Breakers are available in a wide range of styles, amperages, and sizes in order to meet the needs of various industries. Pacer Group offers the most useful breakers that you will need, especially in a marine environment. We currently offer magnetic, thermal, and marine breakers in order to complement and protect your electrical system. Below we will take a more in-depth look at each of these types of breakers.

Thermal breakers are a type of circuit breaker that uses a bi-metallic strip employed to sense electrical overload conditions. When an overload occurs, that bi-metallic strip absorbs the heat causing it to bend. If the overload surpasses the threshold, the strip will bend to the point that the breaker is tripped, and the electrical circuit is interrupted. It is important to note that thermal breakers are affected by the ambient temperatures of their environment. The higher the ambient temperature, the quicker they are to trip.

Marine breakers refer to breakers, whether magnetic or thermal, that are designed with the marine environment, or other similarly harsh conditions in mind. This means that these breakers are better suited to handle the exposure to elements that the marine environment provides. When you use marine-rated circuit breakers you are getting a higher level of protection than you would get otherwise. When choosing the correct breakers for your specific application, always make sure to consider the conditions they will be subject to.

Where would I use a breaker?

Can these breakers withstand the harsh marine environment?

Every breaker that we carry has been tested and confirmed to work in harsh marine conditions. Now, this does not mean that you can submerge them or leave them open to the elements. It means that they can handle the constant vibration and reasonable exposure that comes with being in an enclosed engine room or compartment. The point is that if you treat them the same way you treat the rest of your electrical system, then they are the ideal choice for use in marine conditions.

What industries use breakers?

Breakers are found in just about every industry that has deals, in any shape or form, with electrical systems. Seeing as how they protect electrical circuits, and more importantly, sensitive equipment, it makes sense that they are a very common electrical part. You will find electrical circuit breaks in the marine industry, automotive manufacturing industry, RV industry, database industry, industrial applications, and a multitude of others. This goes to show just how reliable and trustworthy these circuit breakers are.