Follow along as Pacer Group shows you how to easily understand what the IP Code is and how it works.

Have you heard anyone say something like: “This switch is IP68 certified” or “This phone is certified to IP67”? No? Don’t feel bad. Not a lot of people know about IP certification. So, what is it? Glad you asked. Well, you’ll notice that it’s two letters followed by two numbers. The letters, IP, stand for International Protection, although some people refer to it as Ingress Protection, so, I guess both are accurate descriptions. International/Ingress protection is a standard used to determine the degree of protection that mechanical casings and electrical enclosures can offer. Basically, The IP Code is a rating system that can let you know just how much punishment the case or enclosure in question, can handle.

“The whole point of the IP Code is to get away from generalized terms like “waterproof” or “dust resistant”.”


What about the two numbers? Don’t worry, we’ll get there. So, the entire idea of the IP Code started as a way to standardize and measure the amount of protection certain electrical containers can withstand. The whole point of IP Certification is to get away from generalized terms like “waterproof” or “dust resistant”. By having a systematic method to measure the level of protection, a device can be given a rating. This rating removes any of the mysteriousness behind terms like “water resistant”. Let’s be serious, “water resistant” can be quite misleading. Can I swim down 15 feet with something water resistant? Can I stay in the water for hours? You see my point? By having a consistent standard, it is easier to know exactly just HOW water resistant it is. This benefits everyone from the manufacturer to the consumer.

So now that we know why it is important and necessary to have a system like the IP Code, let’s look at exactly how it works. We already discussed what the “IP” stands for, so let’s get straight into the good stuff. The numbers. Each of the two number columns represent a different factor. The first number deals with solid objects and these can get really small since it factors in dust. That’s right. Dust. Dust can have a detrimental effect on electrical components, so yeah, let’s factor dust too. The second number deals with moisture. Just how much fluid, and the amount of pressure behind it, that the object in question could handle. So let’s say an object has an rating of IP10. That means it has the first level of protection from solid objects and absolutely no protection from moisture. Well, that’s not very good is it? At least not when considering electrical components. Take a look at the chart below we created for a complete breakdown of the how the system works. 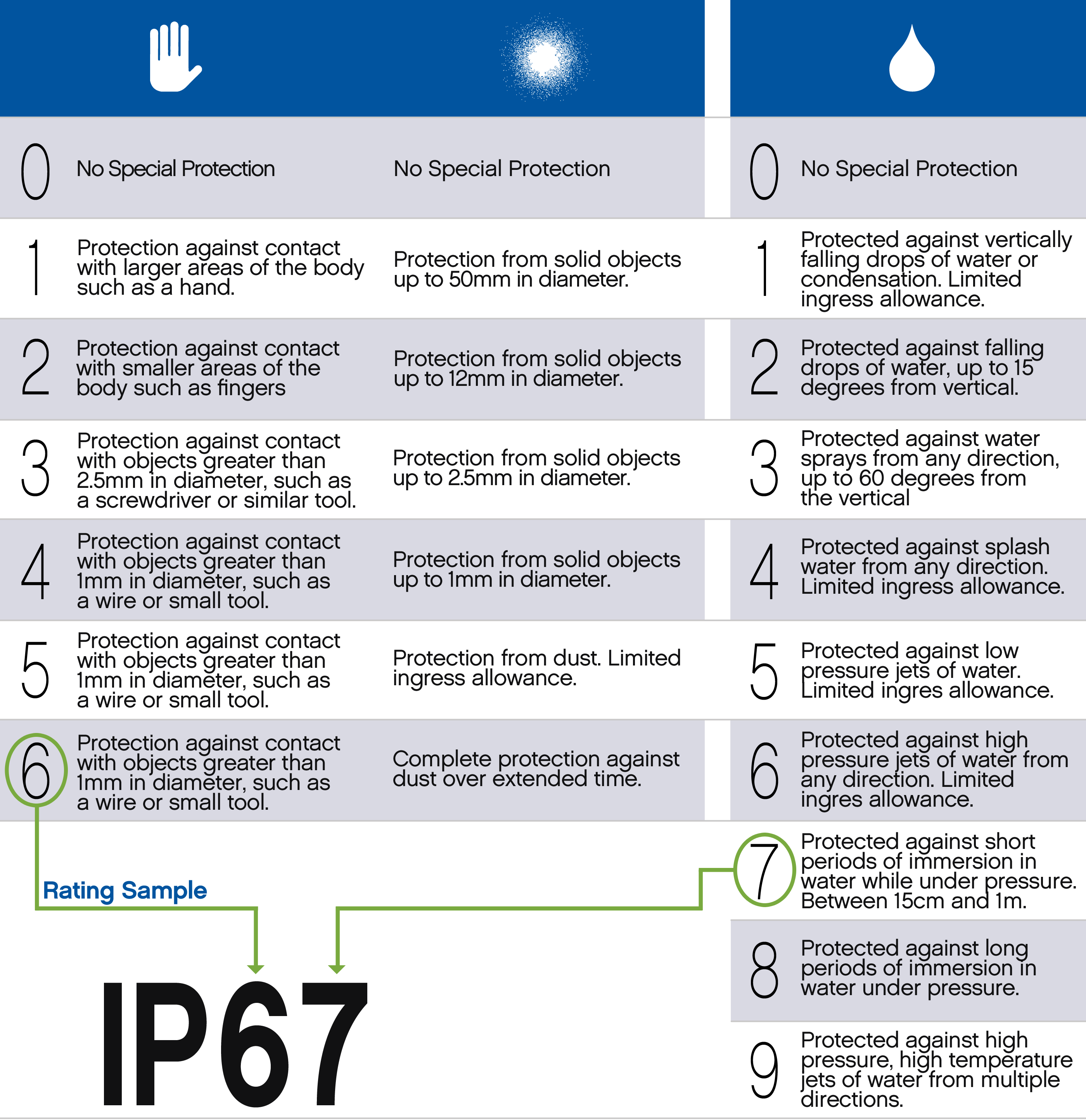 Now you know exactly how the IP Code works. Was it easier than you thought? Good, because now I’m going to test you. Let’s look at a few examples to make sure you got it. 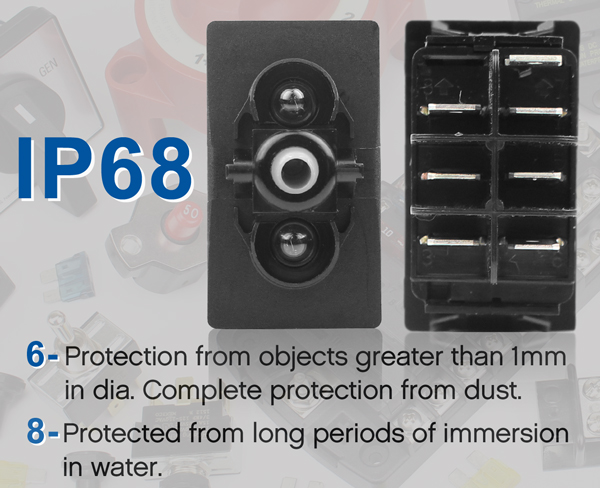 This is a Contura Rocker Switch. It is rated at IP68. What does that mean? Come on you know this. It means that this switch offers complete protection against dust even over an extended period of time. It also means that it can be immersed in water for an extended time too. Don’t you feel smarter? 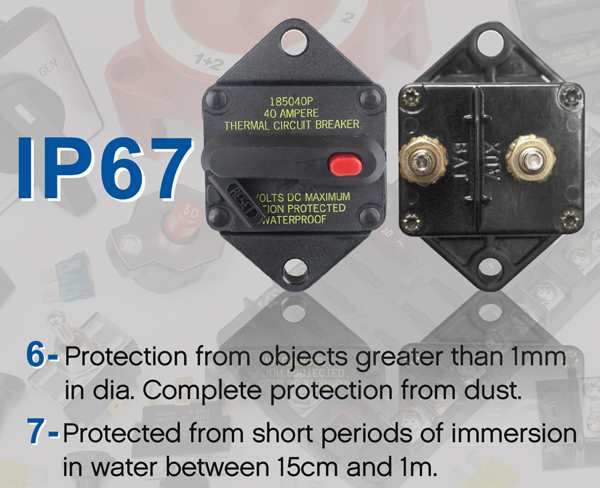 Ok, now this is a Bussman circuit breaker. It has a rating of IP67, pretty close to the switch above. So what’s the major difference? Well, this breaker has a moisture rating of 7 which means that it can only be submerged in water for a short time and no deeper than 1 meter. See how useful this is?


Great! So now you know how to read the IP Code and why it is important to have a system like this. Now next time you buy a “waterproof” camera and it says it offers IP67 protection, you’ll know that it’s not REALLY a waterproof camera. You can thank me later. Oh, before you go, check out the little tidbits of trivia I have for you.

There was a third digit 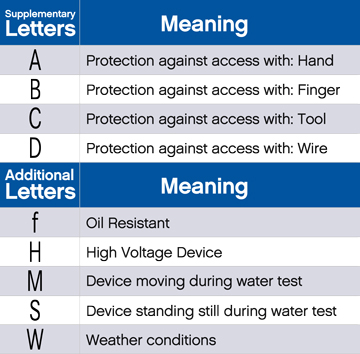 So you get that the two digits in the IP Code represent solid objects/dust and moisture respectively. Did you know there used to be a third digit? It was used to measure “Mechanical Impact”, which is exactly what it sounds like. The third digit was removed from the IP Code and moved to the separate IK Code specified in EN-62262, but that’s a story for another day. Although no longer used, you may find it on older electrical casings and enclosures. Now you can sound like a smarty to all your friends.

Sometimes there are Letter Codes on the end


You may notice from time to time, an IP Code that has a letter on the end of it. How mysterious. Don’t worry, these aren’t frequently used so you probably won’t see them much. They are used to denote extra protections not covered in the basic two digits. Check out this chart I made just for you for a better explanation.